Extolling the Badenburg, Pierre de Bretagne, who was Max Emanuel's father confessor, said: »The house of baths is a veritable artistic masterpiece.« The park pavilion was built between 1718 and 1722 according to plans by Joseph Effner, and stands as the central feature of the southern half of the park in its own garden area. The ground plan of the main floor consists of an oblong hall with rounded corners. Adjoining it to the south is a similarly oblong wing, including the Bath and the Elector's Apartments (Antechamber, Bedroom, Cabinet, Dressing Room). 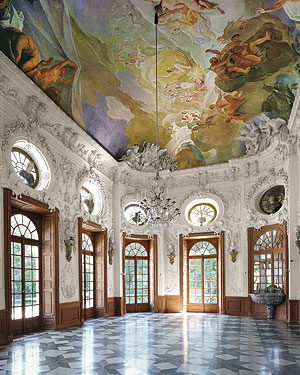 While the Banqueting Hall takes up two storeys, the space above the apartments in the south annex houses small, comfortable rooms (destroyed in 1944). The basement accommodates the bath itself, the heating room, a kitchen and additional bathing rooms.

The Banqueting Hall boasts some magnificent stucco work and ceiling frescoes (Jacopo Amigoni, destroyed in 1944, subsequently restored). Its pictorial programme relates to the element of water, drawing on Classical mythology. The bath is also sumptuously decorated with Dutch tiling to the lower area and scagliola plates to the upper, with a gallery and a ceiling painting depicting fountain motifs.

The Electors' Apartments are fitted with wall panelling, mirror ornaments and a ceiling painted with monkey scenes, but are particularly notable for the Chinese wallpaper in each of the four rooms. 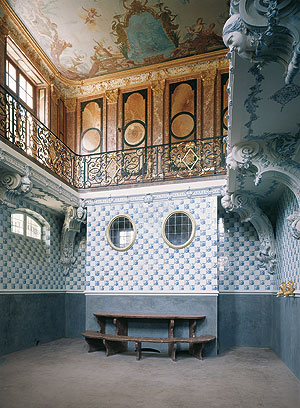 As a bathing pavilion, the Badenburg belongs to a long tradition dating back to the opulent baths of the Roman emperors while also including elements of the Islamic bathing culture. Although conceptually indebted to Baroque baths, Effner's bathing pavilion represents a new creation which was both admired and imitated (Bonn, Kassel, Schwetzingen).

Contemporary reports consistently eulogized the Badenburg. A travel account of 1792, for example, warns that no visit to Nymphenburg should omit either of two things: »One is the Amalienburg…, the other, in a different corner of the park and built by Elector Maximilian Emanuel, are the finest baths imaginable, splendidly equipped with all conveniences. I do not recall seeing anything more delicate or better thought-out anywhere. The pool is so large that one can comfortably swim in it, and if there are people who just want to watch, there is a place (the gallery) where they can position themselves and look on.«