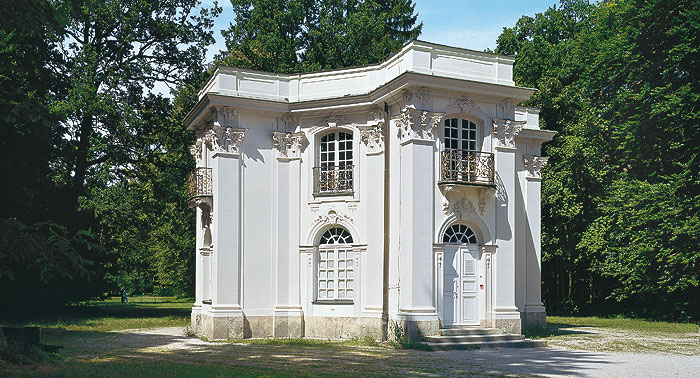 The Pagodenburg was built between 1716 and 1719 by Joseph Effner to a commission from Elector Max Emanuel. Sited north of the main canal, it respects the original plan of the park. To the south of the little palace lies a garden parterre, and to the north a green where the "Mailspiel", a game similar to golf, was played. 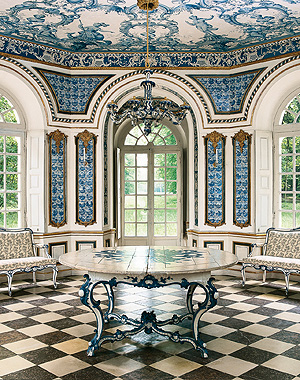 A contemporary account reports: »This Indian building is a place where the lords and ladies rest after the exertions of a round of "Mailspiel"… The lower floor houses a hall and two cabinets, and the panelling has been executed in Arab and Indian styles with all manner of Chinese figures and pagodas.«

On the ground floor the colours blue and white predominate which, together with the exotic elements of the partly ornamental, partly figural ceiling painting and the Dutch tiles, allude to China and porcelain production.

The upper floor accommodates very small but cleverly designed rooms. The Chinese Drawing Room with Chinese wallpaper and black-grounded lacquer painting looks exotic thanks to its colour scheme. The Chinese Cabinet , by contrast, has red-based lacquerwork. Despite its European Regency-style decoration, the Boudoir also has an exotic air on account of its bizarre shape. The rooms were furnished by Johann Anton Gumpp and Johann Adam Pichler. The Pagodenburg is a prime example of eighteenth-century chinoiserie which was very much in vogue at the time.

For his interiors, Joseph Effner designed not only the permanent fixtures but also the furniture. Generally speaking, he drew on the formal vocabulary of the French Regency style. However, in particular instances, he developed new ideas of his own. Thus, in the case of the rooms in the Pagodenburg, he introduced exotic elements into the furniture, creating unique decorative items, such as candlesticks with dragons' heads. Priceless individual pieces complete the exquisite furnishings, such as a games table (Paris, c. 1720/25) and two small Japanese lacquer cabinets remodelled as commodes (Paris, c. 1715/20).