Nymphenburg Palace owes its foundation as a summer residence to the birth of the long-awaited heir to the throne, Max Emanuel, who was born in 1662 to the Bavarian Elector Ferdinand Maria and his wife, Henriette Adelaide of Savoy, after some ten years of marriage.

A site on the edge of the court lands, to the west of the city and the Residenz, was chosen for the new building – a location which, at that time, was still some way out of Munich surrounded by open countryside. In 1664 construction began to the plans of the north Italian architect Agostino Barelli, who also designed Munich’s Theatine Church.

Initially, the Italianate "Nymphenburg summer residence" was a mighty cubic pavilion, flanked by the court church, several outbuildings and a small, walled, geometrical garden. By 1679 the palace complex, in its first incarnation, had nearly been finished.

Nymphenburg Palace acquired its present-day dimensions under the elector Max Emanuel (reigned 1680-1726). Supervised by the court architect Henrico Zuccalli, two off-set pavilions were built on each side of the existing structure, to the north and south. Begun in 1701, the pavilions were linked with the central edifice by galleries. 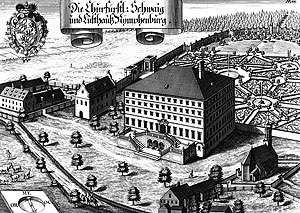 However, the Spanish War of Succession soon put a stop to construction work because Max Emanuel was again obliged to spend time outside Bavaria, from 1704 to 1715.

When the Elector returned to Munich in 1715, he was accompanied by numerous French, or French-trained, artists. As his palace complexes, such as those in Dachau, Fürstenried, Nymphenburg and Schleißheim, were further enlarged, these artists supplied works conforming to the latest French fashions.

Notable among them were the architect Joseph Effner and the garden artist Dominique Girard. But local painters also received important commissions. The views of the Bavarian Palaces in the galleries were executed by Franz Joachim Beich, while among the stucco workers Johann Baptist Zimmermann was the leading light. So it was that the Munich court developed into one of Europe’s foremost centres of the arts. 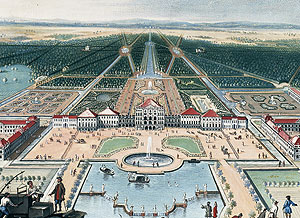 About 1715, the court architect Joseph Effner, together with the French landscape architect Dominique Girard, designed an overall plan for Nymphenburg and the subsequent extension was carried out in accordance with this plan.

Of the measures that were implemented then, the following are the most notable: the central pavilion as the focal point of the ensemble was redesigned, the royal apartments were furnished and decorated, the annexes, situated in front of the main palace, were rebuilt as residences for court officials and the crescent was constructed with a circular wall and five pairs of pavilions. Radiating out from the centre, the perspectively off-set structures fused to form a completely symmetrical "ideal town" which could accommodate the royal household.

After 1715, and following the plans of Dominique Girard and Joseph Effner, the park was also redesigned and extended, giving it its present dimensions and Baroque style.

Karl Albrecht, first as Elector of Bavaria (reigned 1726-45) and then as Emperor Charles VII (from 1742 onwards), continued the construction work at Nymphenburg begun by his father. He enhanced the complex by adding the palace’s crescent. Both palace and crescent were intended to form the centre of a planned "Carlstadt" ("Charles Town"). 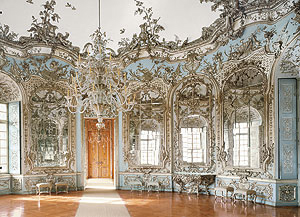 His most precious legacy, however, is the Amalienburg in Nymphenburg’s park. With this witty, graceful Rococo gem, François Cuvillés the Elder, a Paris-trained architect, brought Munich court art to its peak of expression. Executed by pre-eminent artists and specialist court workshops, the Amalienburg now ranks among the most charming European architectural creations of the period.

Under Elector Maximilian III Joseph (reigned 1745-77), the Great Hall at Nymphenburg Palace acquired the opulent decoration that can be admired today. Here Johann Baptist Zimmermann, together with François Cuvilliés the Elder, created a major work of Munich court Rococo. The vaulted ceiling of the Palace Chapel was also painted. Finally, under Max III Joseph, the Nymphenburg Porcelain Manufactory moved into its present quarters at the front of the palace.

At this time the park, too, was given a new look. The Grand Parterre was remodelled and adorned with statues of the most important gods of Olympus. The exterior flights of steps, also date from this period and form a suitably representative entrance to the main building and Great Hall.

Elector Karl Theodor, who ruled in Bavaria and the Palatinate from 1777 to 1799, changed little at Nymphenburg. He had the galleries widened to create new rooms which were furnished in the style of the day. In 1792 Karl Theodor opened the Nymphenburg palace park to the public. 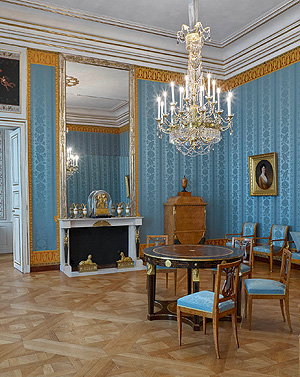 When Bavaria became a kingdom, in the early nineteenth century, Nymphenburg resumed its important function. Elector Maximilian IV Joseph, who, as Maximilian I Joseph, was the first King of Bavaria (reigned 1806–25), ordered some of the rooms to be redesigned and appointed with noble Neoclassical furniture.

The superintendent of the royal gardens, Friedrich Ludwig Sckell, tranformed the geometrical French gardens into a landscape garden in the English style.

King Maximilian I Joseph died at Nymphenburg in 1825. In subsequent years the palace remained a favourite residence of the Bavarian royal family. King Ludwig II of Bavaria (reigned 1864-1886) was born here on 25 August 1845.