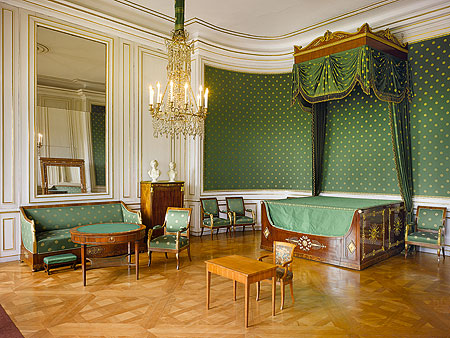 Queen Caroline’s bedchamber still has its original furnishings. Its mahagony furniture was made in 1815 in Munich. The rounded alcove niche contains a double bed. In the daytime it was hidden by a cover spread over a high frame. Caroline made the room look private with children’s furniture and various personal possessions.

In 1842 the Bavarian Crown Prince Maximilian (II) and his wife Marie of Prussia took up residence in Nymphenburg Palace. On 25 August 1845, the name day of St Ludwig, the Crown Princess gave birth to the heir to the throne, the later kind Ludwig II, in this room. The child was named Ludwig – in honour of his grandfather Ludwig I, who was born on the same day. He was christened on the following day in the Great Hall. Crown Prince Ludwig and his brother Otto (1848–1916) are portrayed as children in the two busts dating from 1850 on the writing desk. The portrait of their mother Marie hangs in the Gallery of Beauties.

back to the Queen's audience room

further on to the palace chapel