Great Hall – start of the tour

The basic form of this central room in the palace complex has not been changed since Nymphenburg was first built. The walls were decorated under Elector Max Emanuel with the architectural features we see today. 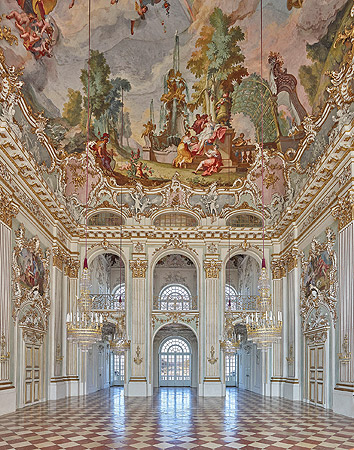 In 1755 to 1757, Elector Max III Joseph had the Great Hall redesigned together with the two halls on its west side. With the participation of François Cuvilliés the Elder, Johann Baptist Zimmermann produced his last main work, a cycle of frescos framed by lavish rococo stucco-work, thus creating one of the best large-scale interiors in the late court Rococo style characteristic of Bavaria.

The huge ceiling painting depicts the Olympian heaven, symbolizing the duty of the ruler to bring and receive peace. On the park side nymphs pay homage to the nymph Flora who has become a goddess, a reference to the name of the palace.

The Great Hall has remained unchanged since 1758. With the exception of dusting and small improvements within reach of the users, it has not been touched, so that it has been preserved as an authentic rococo room.

Homage to Flora, detail from the ceiling painting in the Great Hall

back to the palace chapel (end of the tour)

further on to the North Antechamber