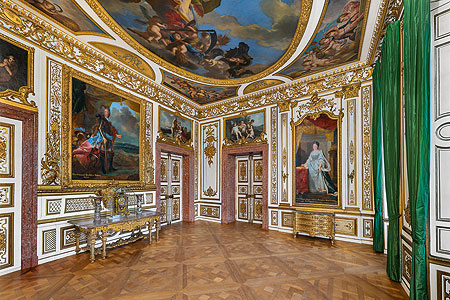 After his return from exile in France in 1715, Max Emanuel devoted himself to decorating his summer residence. This small hall is an intact example of the French style of interior design at the time. The carved weapon trophies on the panelling and stucco-work musical instruments on the ceiling cornice are the leitmotifs of the late Baroque decoration.

With his portrait as a successful general, Elector Max Emanuel created a monument to himself in this room. The painting by Joseph Vivien dating from 1711 portrays the elector in armour in front of the Namur fortifications. Its counterpart shows Max Emanuel’s second wife Therese Kunigunde, daughter of Johann Sobieski, the king of Poland.

The centre picture on the ceiling was painted during the first building period in around 1675. It is by the Venetian artist Antonio Zanchi and shows Ceres, the goddess of agriculture.

back to the Great Hall

further on to the antechamber